skip to main | skip to sidebar

A Farewell To Opa

On August 7th, my grandfather died after going into a decline due to old age. He was ninety-six years old, barely a week short of his birthday.

My siblings and I didn't know him very well, as we visited Kevelaer whenever we flew to Germany, but this was a rare occasion. Still, he was a presence in our house, not only through the cards that Oma sent us for Christmas and Easter, but also through photos and his memoirs and his art. For a long time we've had three stained-glass panes that he made, all three bearing Biblical motifs like the dove and flames of Pentecost, and a gouache(?) prototype for a fourth pane depicting Russian onion domes. I quite impartially like these very much, because they are not at all kitschy, the tints are very beautiful, and there is a harmony and depth to them. They are traditional but distinctive; and the relative simplicity of the lines and shapes reconcile their old-fashioned elements to modernity. But (as art was his profession) he also worked in many other media: pencil sketches, bronze and majolica sculpture, mosaics, sgraffito, etc.

As for his life, he was born in a German enclave in Belgium, and experienced World War I there. When the next war broke out, he was with the German army in Russia, and had a predictably disagreeable time where his conscience and religious upbringing were in constant conflict with his environment. Even after the war was officially over, he was interned in a Russian prisoner of war camp for years. Back in Germany, he settled in Kevelaer and worked as an artist, eventually marrying my grandmother and raising twelve children (all boys, except for my mother) with her. He lived and wrought peacefully in the small-town atmosphere of Kevelaer, though he also corresponded with and hosted people from abroad. The town itself is also constantly stirred by the passage of domestic and foreign pilgrims; they come to the basilica and chapel in honour of Mary's appearance in the dreams of a merchant, and his subsequent building of a chapel dedicated to her, in the 17th century.

There is a good assembly of his works at a website that Uncle B. set up for Opa, here. (The girl with the tousled hair in the photos is Mama. (c: )
Posted by Edithor at 10:22 AM 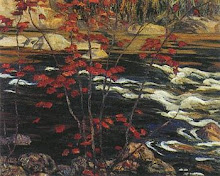 Edithor
Canadian-raised Berliner. 35 years old. Data entry. Outside of working hours I am interested in literature, languages, classical music, and many other things.

The content of this blog may be copied in non-profit publications, without the formality of a request, if credit is given. Otherwise please contact me using the e-mail address listed on my profile.